Note: The Education Endowment Foundation has a very different scale with an effect size of d = 0.1 equivalent to 1 Months progress. So Hattie's 0.4 would be 4 months progress.
This difference is very concerning since it breaks one of the foundations of the Scientific Method, Reliability- "is the degree of consistency of a measure. A test will be reliable when it gives the same repeated result under the same conditions."

In terms of teacher assessment, he takes this one step further by declaring teachers who don't attain up to an effect size of 0.40 are "below average" Hattie (2010, p. 87).

These claims are a major concern for a number of reasons, the Reliability issues as stated above and also Hattie's financial interest in a Teacher Assessment software program called e-asTTLE and performance pay.

Although, he did backtrack in his summary VL 2012 publication regarding the meaning of d = 0.40,


"I did not say that we use this hinge point for making decisions, but rather we used it to start discussions" (p. 14).


"The average effect size was 0.4, a marker that represented a year’s growth per year of schooling for a student. Anything above 0.4 would have a greater positive effect on student learning."

Yet, also on this web site in the publication "Real Gold vs, Fool's Gold" Hattie appears to backtrack from these claims about 0.40,


"But we must not get too oversold on using d = 0.40 in all circumstances. The interpretation can differ in light of how narrow (e.g., vocabulary) or wide (e.g., comprehension) the outcome is, the cost of the intervention (Simpson, 2017) ...When implementing the Visible Learning model, it is worth developing local knowledge about what works best in the context and not overly rely on 0.40. The 0.40 merely is the average of all 1,600 meta-analyses..." (p. 14)

Though this assertion is debatable as mentioned by Proulx (2017), the lack of detail in Hattie also raises questions about these associations between magnitude of effect and duration.

For example, ... is an effect of d = 0.2 equivalent to the progression of a pupil over a half-year school?

These questions, for me, remain vibrant on reading all these averages and effects."

"An observed effect size of, for example, 0.3 would obviously hardly correspond to the magnitude of the increase in competence over the course of a school year."

THE NEED FOR BENCHMARK EFFECT SIZES:

Cohen (1988) hesitantly defined effect sizes as "small, d = 0.2", "medium, d = 0.5", and "large, d = 0.8", stating that "there is a certain risk in inherent in offering conventional operational definitions for those terms for use in power analysis in as diverse a field of inquiry as behavioral science" (p. 25).


"there is no universal guideline or rule of thumb for judging the practical importance or substantive significance of a standardized effect size estimate for an intervention. Instead one must develop empirical benchmarks of comparison that (see table of US benchmarks below) reflect the nature of the intervention being evaluated, its target population, and the outcome measure or measures being used. We apply this approach to the assessment of effect size measures for educational interventions designed to improve student academic achievement."


"Cohen’s broad categories of small, medium and large are clearly not tailored to the effects of intervention studies in education, much less any specific domain of education interventions, outcomes, and samples. Using those categories to characterize effect sizes from education studies, therefore, can be quite misleading. It is rather like characterizing a child’s height as small, medium, or large, not by reference to the distribution of values for children of similar age and gender, but by reference to a distribution for all vertebrate mammals."

The United States Department of Education has commissioned a more detailed study of the effect size benchmarks, for K-12, using the national testing across the USA of around 50 Million students (table of results below from Lipsey et al (2012, p. 28)): 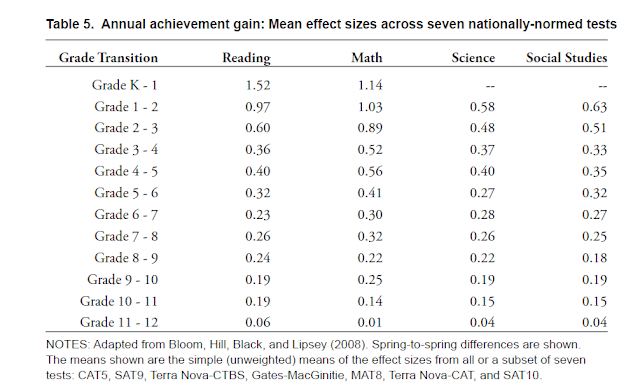 So Hattie's minor adjustment misses the HUGE variation from young to older students. He also does not address the use of much older college-level students and practising professionals, like doctors and nurses in many of his meta-analyses, e.g., 'self-report grades', 'problem-based learning', 'worked examples', etc.

The HUGE variation is a major moderator in Hattie's method of comparing effect sizes. The difference in two different influences could be simply due to the age of the students being measured.

Further, Professor Dylan Wiliam has also identified that meta-analyses need to control for the age of the students and the time period over which the study is conducted. Hattie's does NOT do this.

Wiliam goes further and says if this is not done the results are 'GARBAGE'.


"In studies that do have control groups and in which experimental and control groups were tested on material they were both taught, effect sizes as large as +0.80, or even +0.40, are very unusual."

Hattie finally admits this in his 2015 article in which he defends some of the critiques:


"...the time over which any intervention is conducted can matter (we find that calculations over less than 10-12 weeks can be unstable, the time is too short to engender change, and you end up doing too much assessment relative to teaching). These are critical moderators of the overall effect-sizes and any use of hinge=.4 should, of course, take these into account."

Yet Hattie DOES NOT take this into account, there has been no attempt to detail and report the time over which the studies ran nor the age group of the students in the question. Clear examples are the studies Hattie used in the category of "Feedback".

Also, the landmark US study goes on to state:

and also defined the criterion for accepting a research study (i.e., the quality needed):

NOTE: using these criteria few of the 800+ meta-analyses in VL would pass the quality test!
Is Year's or Months of Progress a Reliable Measure?

Matthew Baird and John Pane in Translating Standardized Effects of Education Programs Into More Interpretable Metrics compared the “years of time” translation to three other reader-friendly measures, rating which were most and least accurate reflections of effect sizes: to benchmarking against similar groups in other studies, to percentile growth, and to determining the probability of meeting a certain threshold. They conclude that,